The US Department of Justice (DoJ) on Tuesday indicted two hackers for their alleged involvement in defacing several websites in the country following the assassination of Iranian major general Qasem Soleimani earlier this January.

Behzad Mohammadzadeh (aka Mrb3hz4d), 19, and Marwan Abusrour (aka Mrwn007), 25, have been charged with conspiracy to commit intentional damage to a protected computer for a widespread “cyber-assault” that affected over 1,400 websites with pro-Iranian and pro-Palestinian messages.

“The hackers victimized innocent third parties in a campaign to retaliate for the military action that killed Soleimani, a man behind countless acts of terror against Americans and others that the Iranian regime opposed,” said Assistant Attorney General for National Security John C. Demers in a statement.

The defendants, from Iran and Palestine, respectively, are now wanted by the US authorities and are no longer free to travel outside their countries without risking an arrest.

Although Abusrour and Mohammadzadeh have been behind a defacing spree individually on their own over the last couple of years, they began to work together starting last December, before stepping up their attacks on January 3, a day after the US forces killed Qassem Soleimani in a drone airstrike near Baghdad International Airport.

With help from Abusrour, who provided Mohammadzadeh with access to compromised websites, the latter went on to hack into at least 51 websites in the US by replacing their content with pictures of the late general against a background of the Iranian flag along with the message “Down with America,” alongside “Suleimani was not a person/he was a belief/Beliefs never die.” 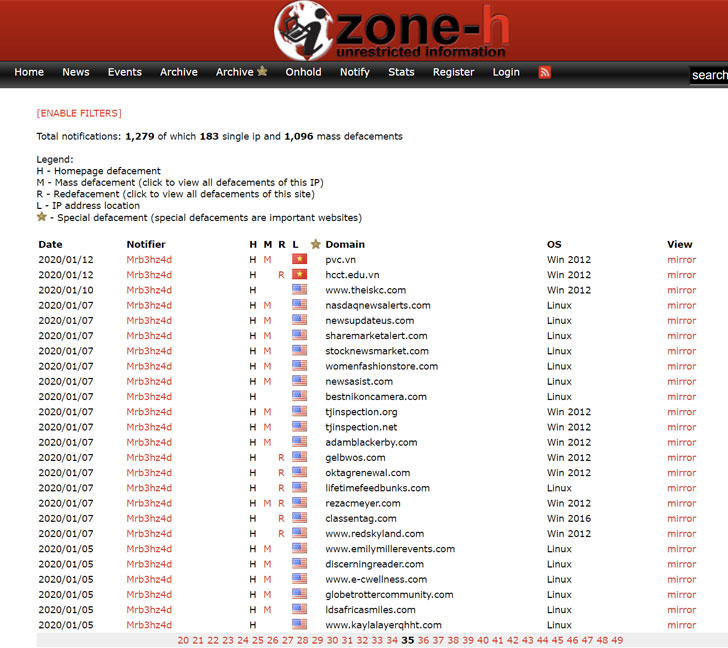 In addition, visitors of the defaced websites were directed to Mohammadzadeh’s Telegram and public Instagram account, which subsequently redirected users to Zone-H, a security portal that holds an archive of all web intrusions, linking the exploits to his pseudonym “Mrb3hz4d.”

The indictment also highlighted a screenshot of the messages shared between the two individuals and posted on Abusrour’s Instagram account that revealed the list of seven websites that were broken into, and noted that the hackers posted the results of their work on social media and other online accounts in order to publicize their defacements.

The two hackers have now been charged and risk sentences of up to 10 years in prison and fines of up to $250,000, if found guilty, according to the DoJ.

“Foreign hackers are a persistent commercial and national security threat to the United States,” said US Attorney Andrew E. Lelling. “Working with our law enforcement partners worldwide, we will aggressively pursue, prosecute and apprehend those who use the internet to attack American interests.”