Any game that involves exploring and scavenging wrecked spaceships is going to attract my attention, and Breathedge is a game about exactly that. At least, that’s how it initially appears. In practice, Breathedge is a much stranger experience, and sadly not in a good way. While notionally a survival game, it lends most of its attention to try-hard humour rather than creating compelling survival mechanics. Then, about halfway through, it basically ditches its core premise for a new, far less interesting structure. 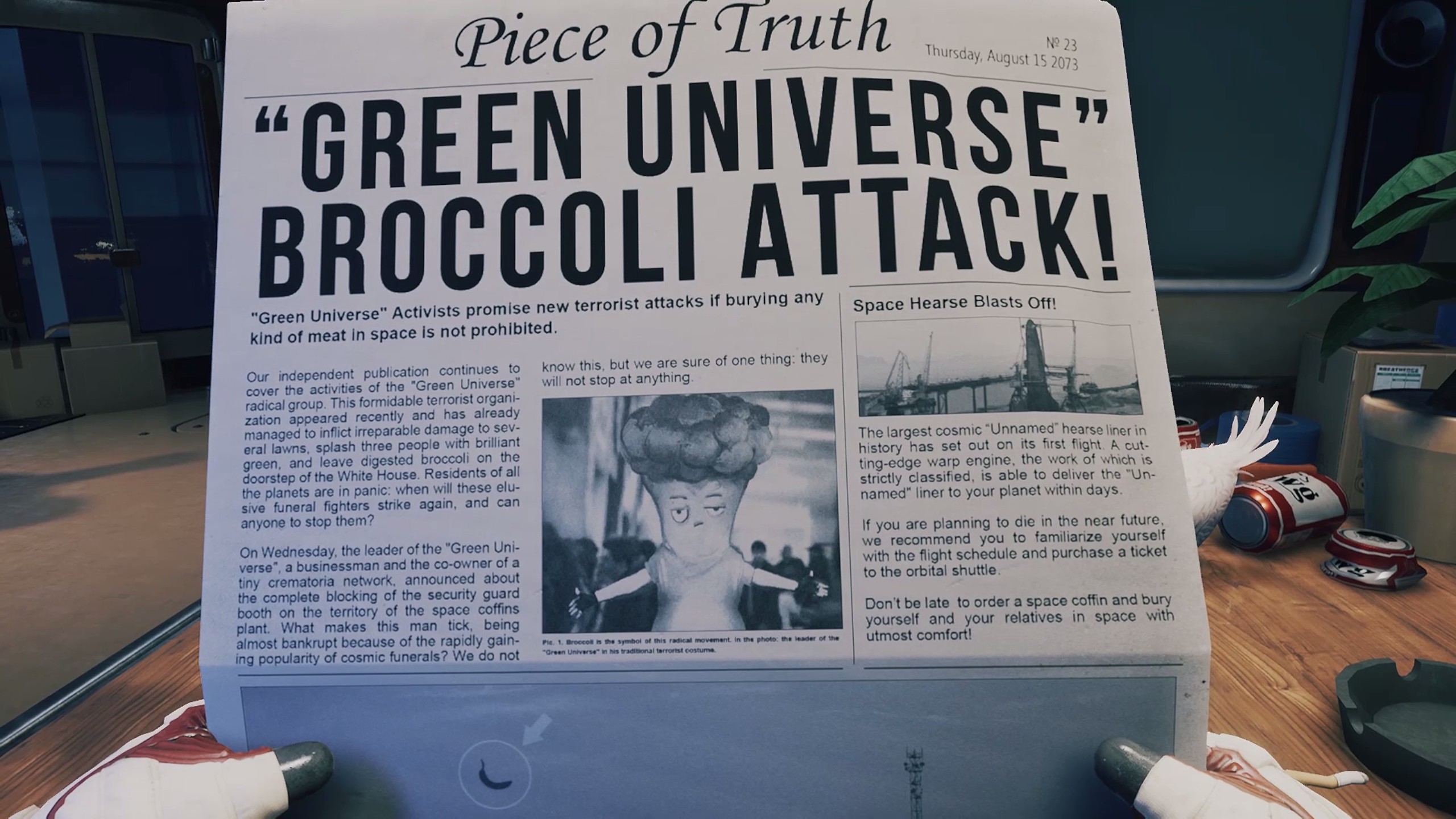 Breathedge puts you in the role of an everyday Joe who is travelling aboard a gigantic funereal transport ship with his deceased grandfather. Presumably to be buried, although knowing Breathedge’s…unique personality, you could well be taking him to be fed to a brace of smart-mouth alien pigs. In any case, neither eventuality transpires, as the ship is struck by some unknown calamity and explodes. You only survive because the pressure seals on your personal pod remain intact.

From here, Breathedge offers a familiar combination of exploration, scavenging resources, crafting, and eventually base-building. We’ll get to the problems with all this soon enough, but first I want to talk about the one thing that Breathedge does really well. Namely, cool space shit. 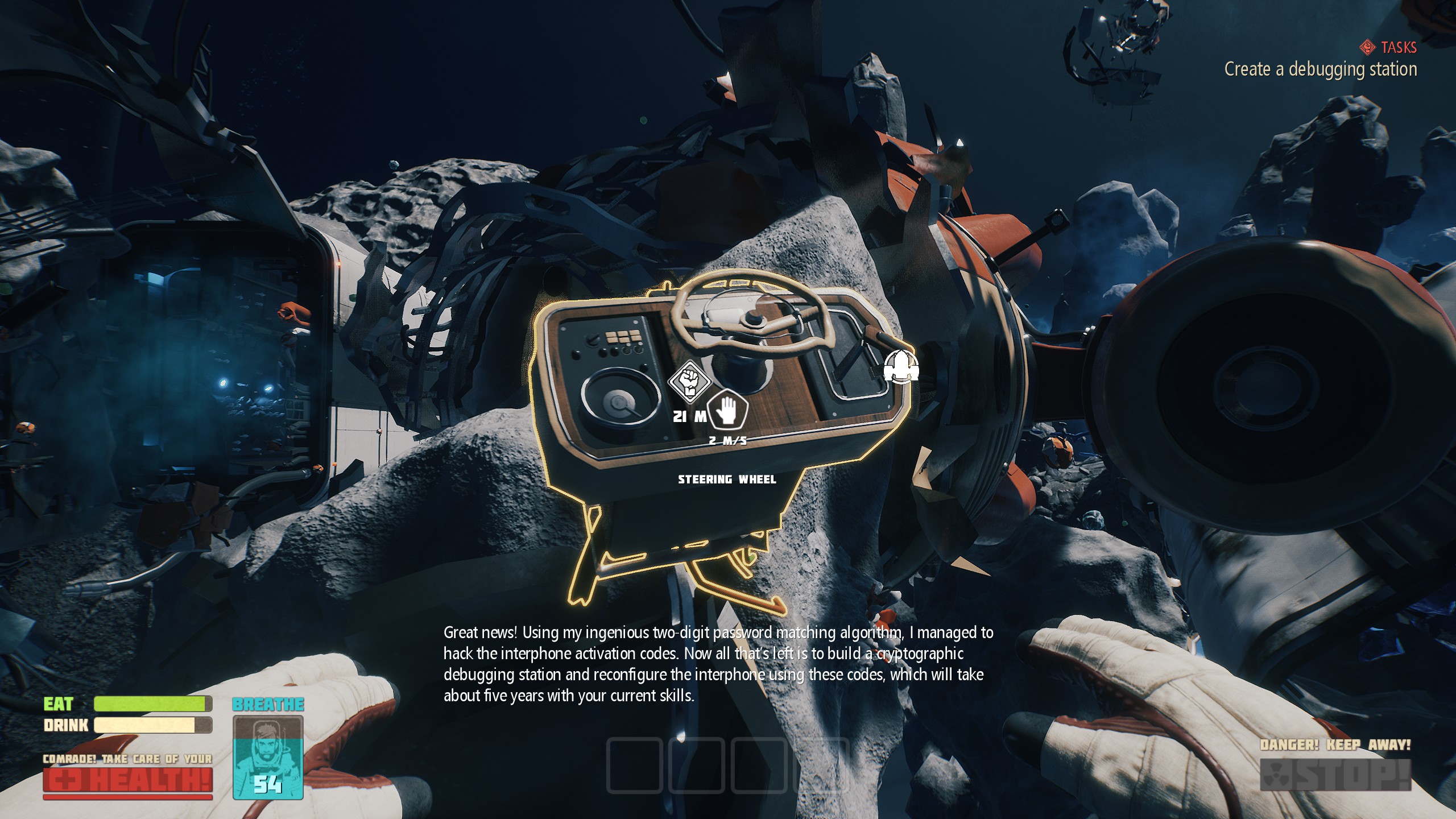 The game’s first two areas, which together comprise roughly two-thirds of the game, are truly stunningly designed. Stepping out of your pod, you find yourself floating in a huge asteroid field stretching far off into the distance, strewn with wreckage and debris from the crashed spacecraft. From the shredded remnants of rooms and corridors, to vast chunks of the spacecraft that loom around you as you approach, it makes for some truly spectacular imagery. The wreckage also surrounds you, with areas of interest located above and below as well as along the horizontal axis, meaning your first goal in Breathedge is simply to orient yourself appropriately.

All of this is presented in a vibrant, slightly cartoon style that complements the environments superbly. Breathedge has a particular fascination with frozen liquids. Some of the first objects you’ll pick up are hovering balls of ice (used to make water), while you’ll also see elaborate formations of liquids like rocket fuel that have crystallised in the fathomless cold of the void. I also like the exaggerated expressions of the other, less fortunate passengers you encounter, eyes bulging and jaws hanging as they drift silently through the dark. 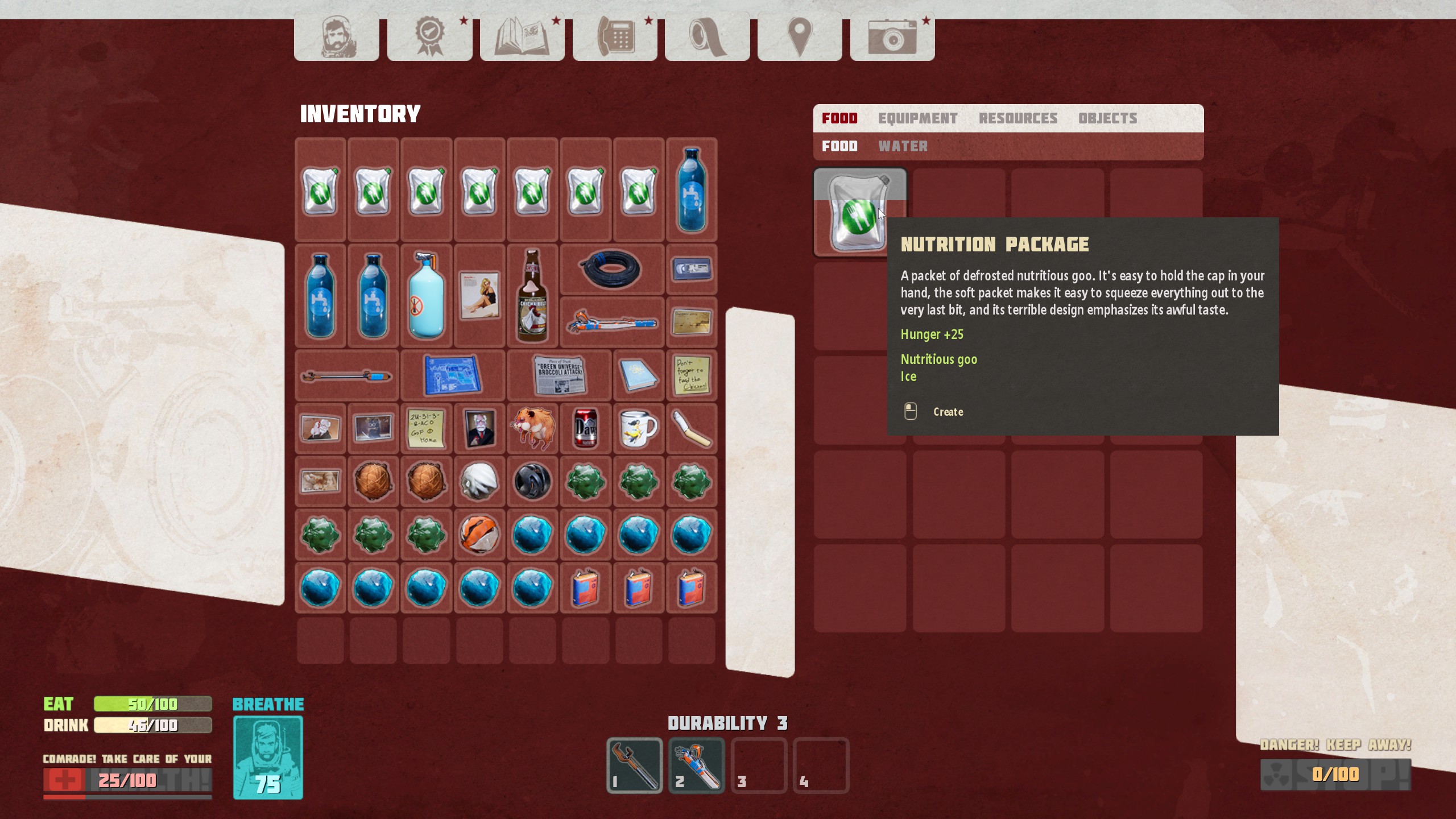 It’s an environment that deserves to be explored. Unfortunately, doing so isn’t all that much fun. As suggested by the title, your main adversary in Breathedge is the whole “space is an inhospitable vacuum that can kill you in 30 seconds” thing. While you’re equipped with a spacesuit, at the outset it has such miniscule oxygen capacity that you might as well be holding your breath when you venture beyond your habitation pod. You can only explore for around a minute at a time before having to return to fill up your O2.

This makes simply figuring out what you’re supposed to do extremely difficult, a problem exacerbated by the fact that the game’s progression system is highly oblique. While there is something of a tutorial, the game provides no real instruction on what you need to do to survive, while the crafting recipes required for progression have no consistency regarding how they’re unlocked. Sometimes you need a blueprint to unlock them, whereas other times they’ll appear the moment you collect a new resource. 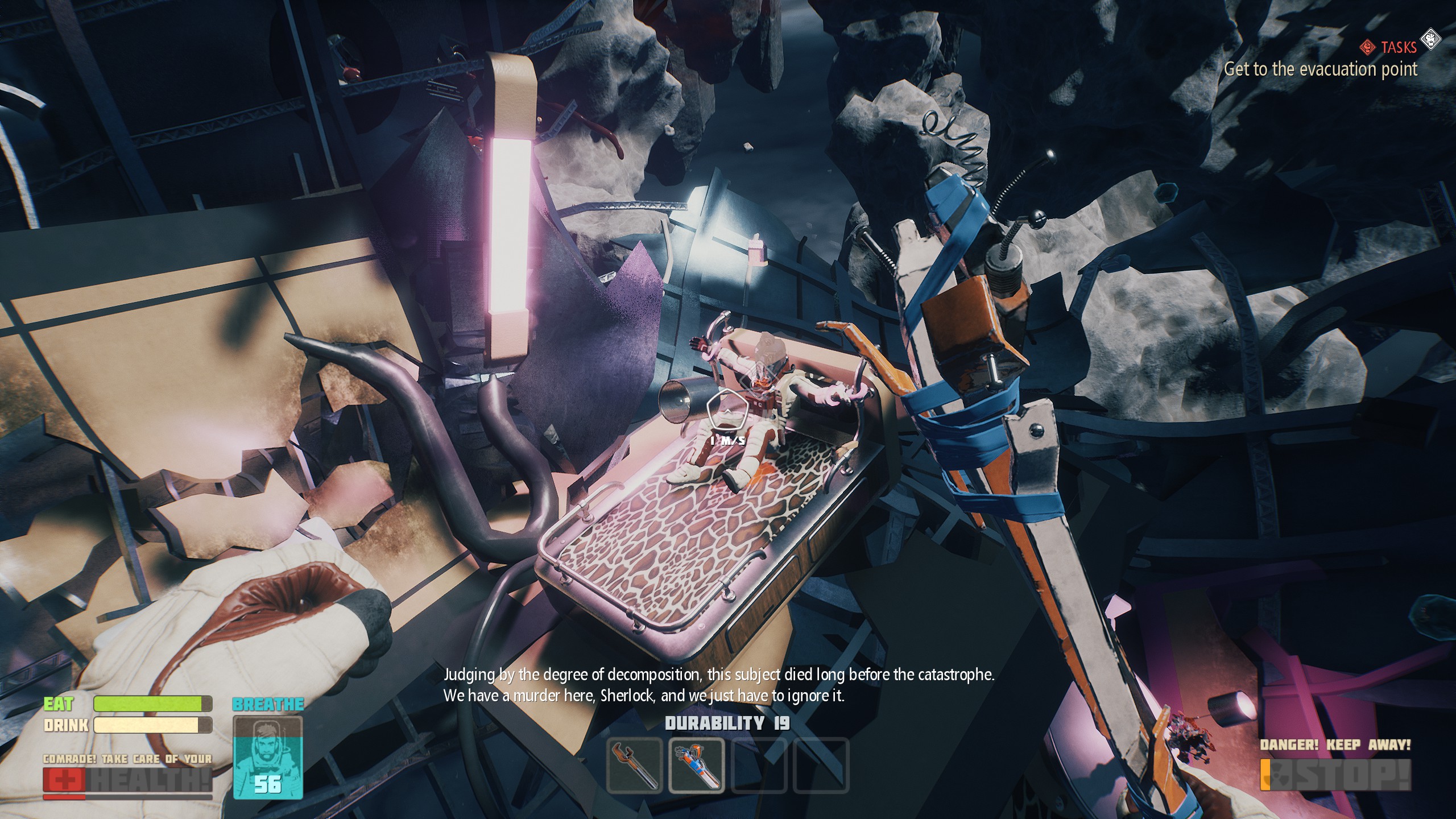 I’d be more forgiving of this if the survival/crafting systems were actually fun or interesting to engage with, but sadly Breathedge is an example of all the worst habits of survival games. You pick up the resources, go to your crafting table, press a button, wait for a timer to fill out, and boom, you’ve made an oxygen supply-station despite having no obvious engineering skill. There’s little mechanical interaction with either the making of things or the things that you make. Even the various tools you create all just hoover up resources with a slightly different animation. It’s worth noting that the game improves somewhat in the second area, letting you construct a base and vehicles that improve your travel abilities. But it never quite gets over the fact that the core crafting systems are so pedestrian.

Instead of creating survival systems that are engaging to interact with, Breathedge throws all its weight behind piquing your interest through comedy. This isn’t completely unsuccessful. I enjoyed the running joke where your character uses an unfortunate chicken to perform a variety of tasks, such as attempting to stop a gas leak by plugging the hole with its head. The game’s commitment to kookiness also makes exploration more interesting, as there are lots of daft visual gags that help spice up the environment. 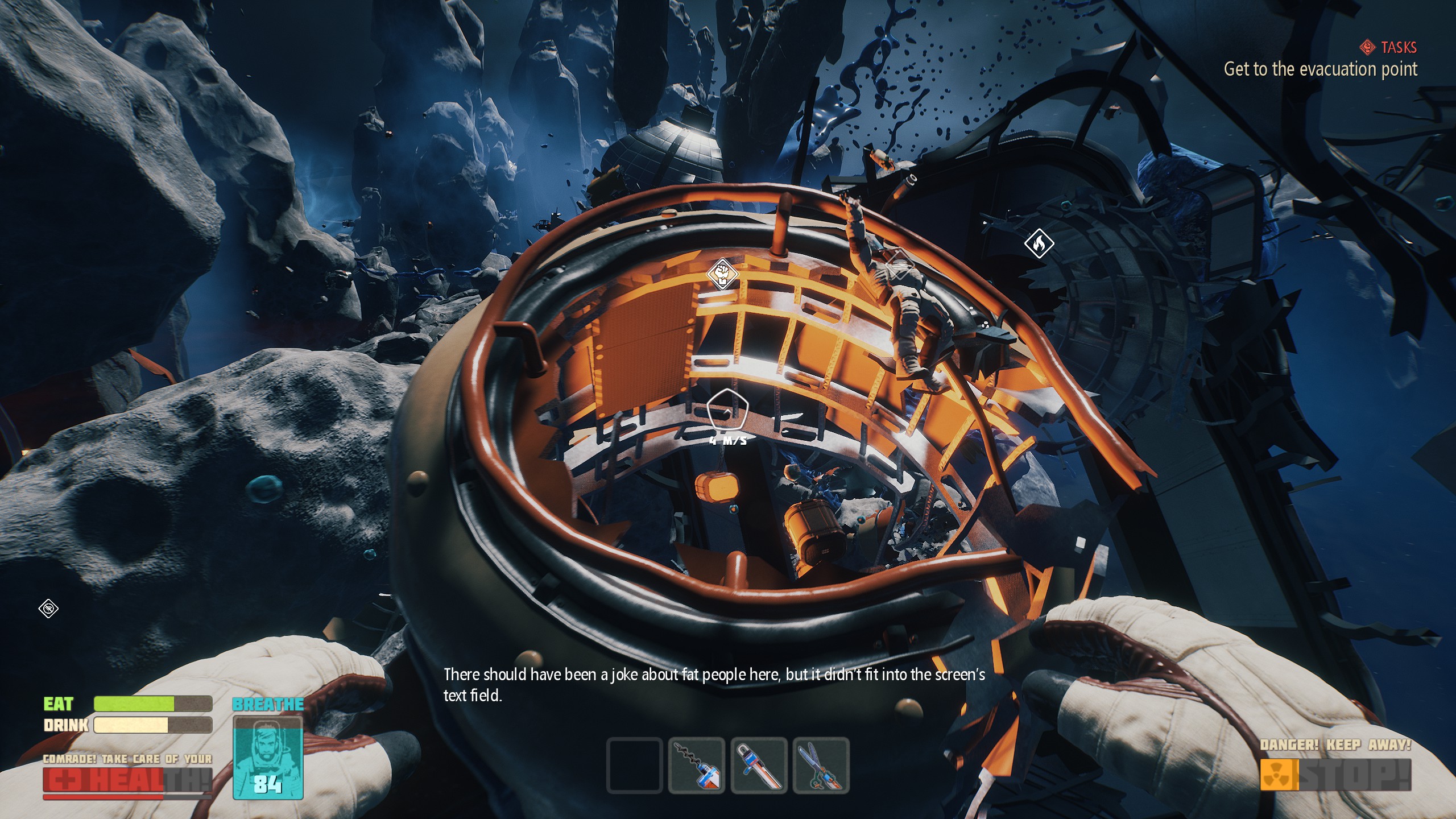 But the comedy script suffers from the fact that a lot of the jokes are simply not very good, while those which aren’t terrible are spoiled by dreadful delivery. Most of the gags stem from your character’s AI companion, who not only speaks in a flat, neutral voice unsuited to comedy, but also rattles through the script at a thousand miles per hour, obliterating the pacing the jokes need to work.

Still, while the mechanics are uninspired and the humour falls flat, I mostly enjoyed Breathedge first half purely for its exploration and knack for portraying space weirdness. Unfortunately, toward the end it ditches this too, switching it out for a linear, narrative-based experience in one of the weirdest structural turnarounds I’ve yet witnessed in a game. It’s truly bizarre, as if the devs ran out of ideas for the sandbox and went “Well, it’s story time now!” 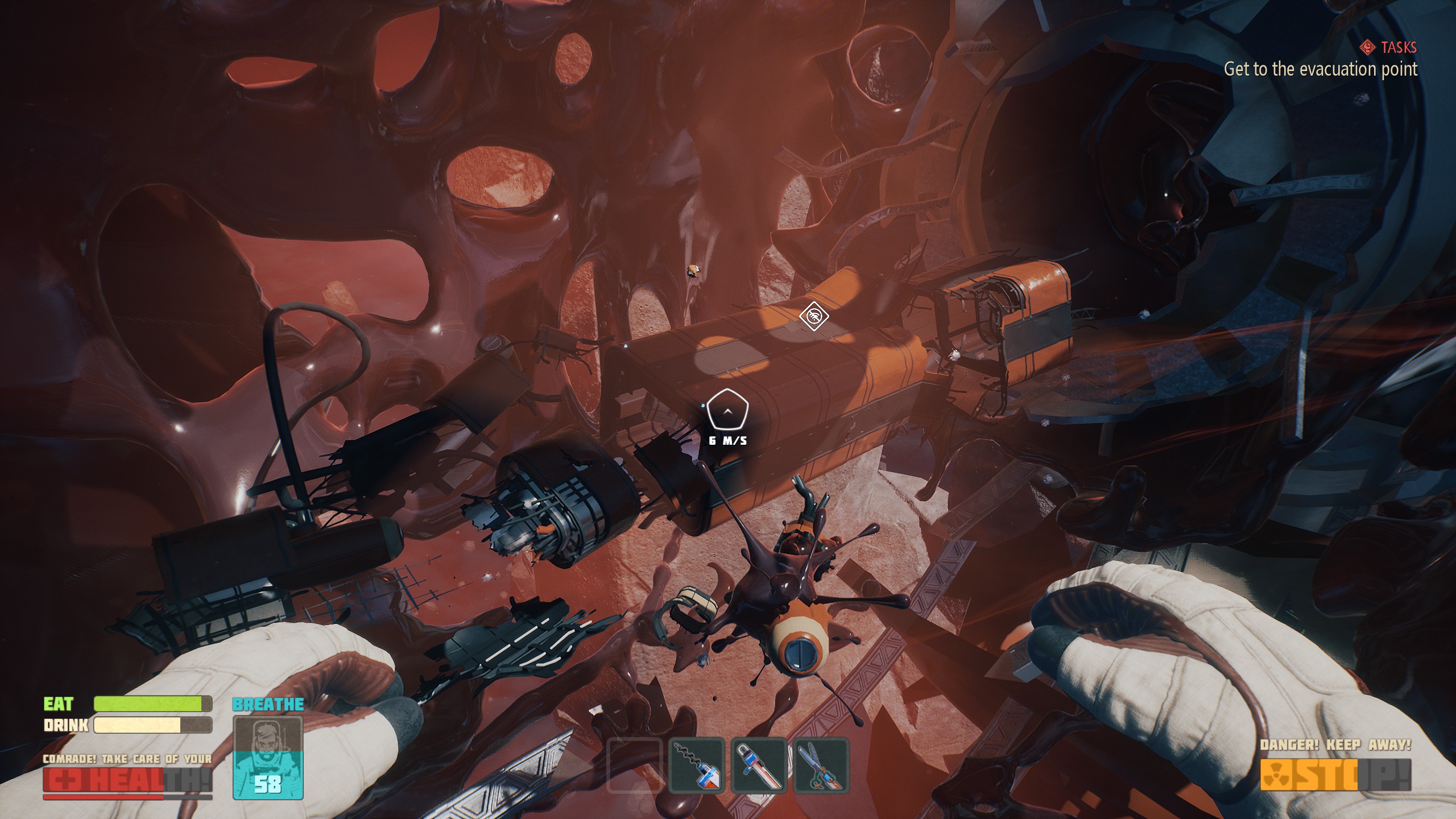 It’s a shame really, as I don’t think any of Breathedge’s problems are unfixable. The environments are fantastic. The comic script would probably work with better voice acting. The core mechanics are functional, they just need to be more interesting. In the end, though Breathedge is less than the sum of its parts, a survival game with a unique wilderness but little else to recommend it.