In a move to protect its users based in Kazakhstan from government surveillance, Google, Apple and Mozilla finally today came forward and blocked Kazakhstan’s government-issued root CA certificate within their respective web browsing software.

Starting today, Chrome, Safari and Firefox users in Kazakhstan will see an error message stating that the “Qaznet Trust Network” certificate should not be trusted when attempting to access a website that responds with the government-issued certificate.

As The Hacker News reported last month, all major Kazakh Internet Service Providers (ISPs) are forcing their customers into installing a government-issued root certificate on their devices in order to regain access to their Internet services.

The root certificate in question, labeled as “trusted certificate” or “national security certificate,” if installed, allows ISPs to intercept, monitor, and decrypt users’ encrypted HTTPS and TLS connections, helping the government spy on its 18 million people and censor content. 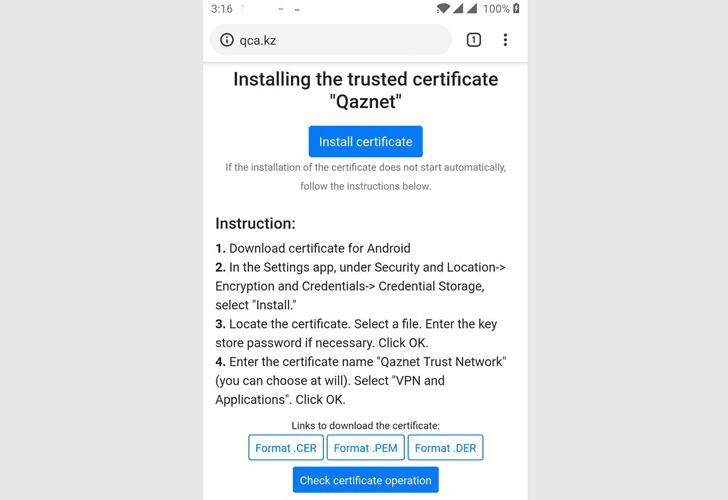 Once installed, the certificate allowed the Kazakh government to decrypt and read anything a user visiting popular sites—, , and Google, among others—types or posts, including intercepting their account information and passwords.

“When a user in Kazakhstan installs the root certificate provided by their ISP, they are choosing to trust a CA that doesn’t have to follow any rules and can issue a certificate for any website to anyone,” Mozilla explained in a blog post published today.

“This enables the interception and decryption of network communications between Firefox and the website, sometimes referred to as a Monster-in-the-Middle (MITM) attack.”

Making installation of the custom root CA certificate not just allow the government to surveil its citizens’ online activities, but also leaves them at risk of social engineering attacks as an opportunity for hackers to trick users into installing a malicious root cert from unofficial websites and sources.

After facing worldwide criticism, the Kazakh government described the initial roll-out of the certificate as a test for monitoring cyber threats and then abandoned its plans to intercept citizens’ internet traffic.

“We will never tolerate any attempt, by any organization—government or otherwise—to compromise Chrome users’ data. We have implemented protections from this specific issue, and will always take action to secure our users around the world,” said Parisa Tabriz, Senior Engineering Director, Chrome.

“No action is needed by users to be protected. In addition, the certificate will be added to a blocklist in the Chromium source code and thus should be included in other Chromium-based browsers in due course,” Google said.

Though Apple has not yet published any blog post, a spokesperson from the company contacted The Hacker News to confirm that its Safari web browser also blocks Kazakhstan’s government-issued root CA certificate.

“Apple believes privacy is a fundamental human right, and we design every Apple product from the ground up to protect personal information. We have taken action to ensure the certificate is not trusted by Safari and our users are protected from this issue,” Apple’s spokesperson told The Hacker News via an email.

This is not the first time when the Kazakhstan government intercepted the internet traffic of its citizens.

In 2015, the government attempted to have a root certificate included in Mozilla’s trusted root store program, but the company denied the request as soon as it was discovered that the Kazakhstan government was intending to use that certificate to intercept user data.

Both Google and Mozilla are encouraging you to remove the Kazakhstan government root certificate from your devices if you have already installed it and to change your passwords for each of your online accounts immediately.

Ruby off the Rails: Code library yanked over license blunder