by TechFed
in Radeon, Sapphire
0

AMD goes toe-to-toe with rival Nvidia at the premium end of the PC graphics card market through the release of RDNA 2-equipped GPUs known as Big Navi. First released as a trio of cards known as Radeon RX 6800, Radeon RX 6800, and Radeon RX 6900 XT, they all share the same powerful die measuring 519mm² and packing in a whopping 26.8bn transistors.

RDNA uses the same Compute Unit building blocks as present on the first-generation Navi productised as Radeon RX 5700 (XT) but has a few key improvements that boost performance. The first is higher speeds on ostensibly the same 7nm manufacturing process, achieved by looking at each part of the design and removing frequency bottlenecks. This alone allows either a 30 per cent frequency uplift, or the same frequency at half the power.

AMD uses a novel method of increasing available memory bandwidth without investing in higher-speed GDDR6 memory or adding to the bus-width of the GPU. This technique is known as Infinity Cache and is rather smart. Sitting between the Compute Units and framebuffer memory, it acts like a giant cache. AMD pulls the technology from its Epyc server processors and implements a 128MB Infinity Cache on this performance trio. According to the company, doing so allows the cards to replicate the benefits of a fatter, faster memory interface without incurring die-size and power costs.

As a sign of the times, each second-generation Navi card has a hardware-based ray accelerator per Compute Unit, to offer improved ray tracing performance. It is AMD’s first generation so will not be as fast as rival Nvidia’s, who has invested in pixel-perfect ray tracing for much longer.

The larger die – which is over twice the size of RX 5700 XT – offers AMD significant opportunity of building faster, higher-performing GPUs. There’s more of everything that matters: cores, bandwidth, framebuffer, Infinity Cache and frequency. Homing in on the Radeon RX 6800 and RX 6800 XT,  we see the latter has 20 per cent more Compute Units and Ray Accelerators, higher peak speeds, the same 16GB of GDDR6 memory operating at 16Gbps, and a matching 20 per cent higher power.

Going bigger still, the top-end Radeon RX 6900 XT extends RDNA 2’s reach by using the full implementation of the die, representing the best that AMD has to offer. The generational uptick is solid, but it remains to be seen in the benchmarks if the Radeon RX 6000 Series has enough firepower to stave off the Nvidia RTX 30 Series.

Sapphire tends to be the best add-in board partner for AMD cards, so we have the Radeon RX 6800 XT and Radeon RX 6800 Nitro in for review. They are both identical for a visual perspective, so we will use one set of photographs – the XT – and explain the specification differences along the way.

Dimensions of 311mm x 134mm x 55mm and a weight of 1.2kg puts them firmly in the premium segment. The width along means they spill over into a third PCIe slot. Two larger fans surround a smaller central spinner which rotates in the opposite direction for, Sapphire says, lower turbulence. All three switch off at low loads, and unlike some, the transition between off and on is smooth.

RGB is available across three sections – the Sapphire logo and light-strip across the top, plus a logo on the backplate – and there are enough LEDs to ensure an even spread of light. If the users want more, there’s also an aRGB three-pin header at the end of the PCB for synchronised lighting. 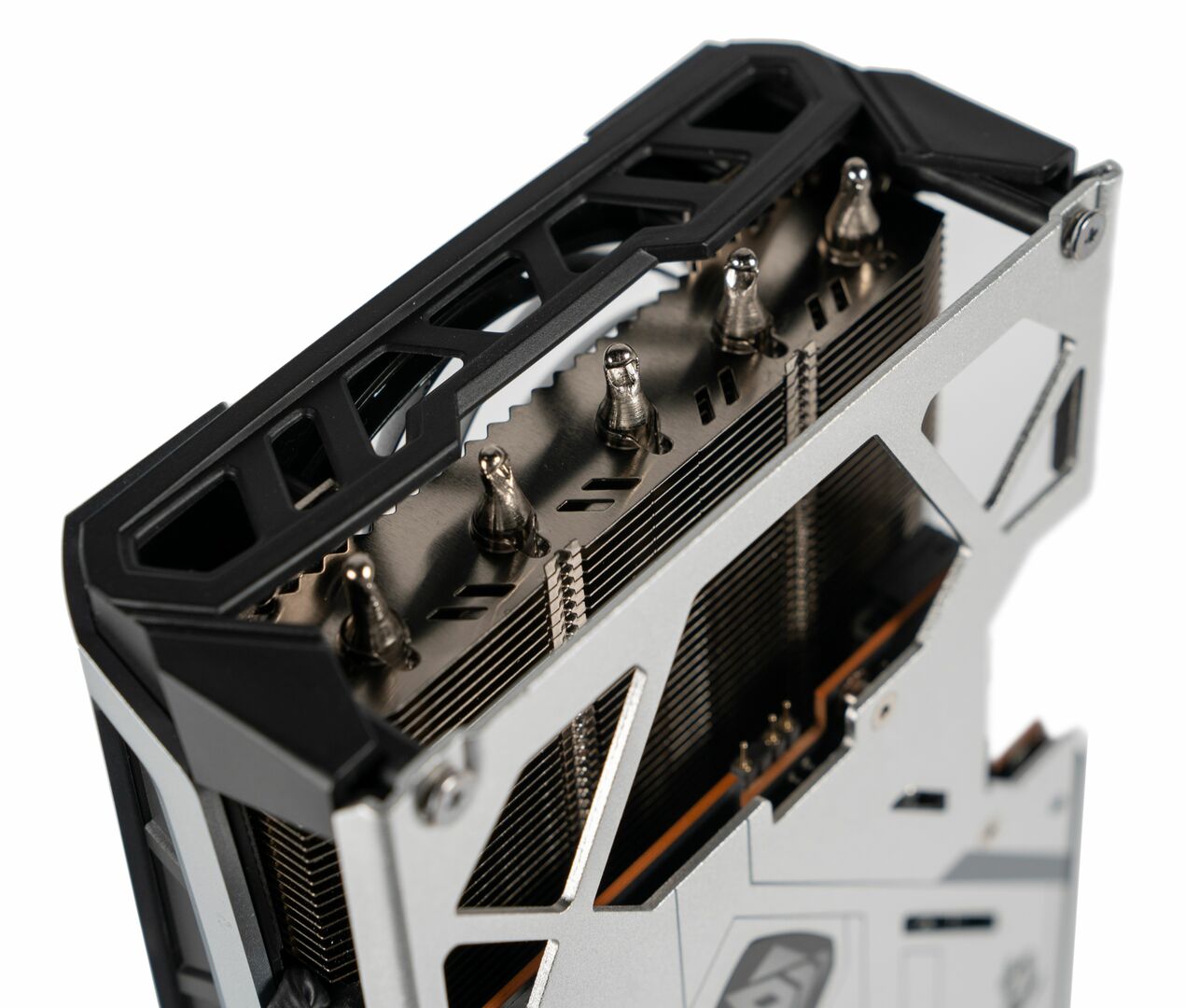 Being large provides Sapphire the opportunity of improving the cooling present on the Made By AMD board. The company duly does, as both cards feature a full-length heatpipe-infused heatsink and a separate one for the memory, VRMs, chokes and Mosfets. There’s decent contact with the components underneath via thermal pads, of which the XT model has the higher-performing K6.5 models. 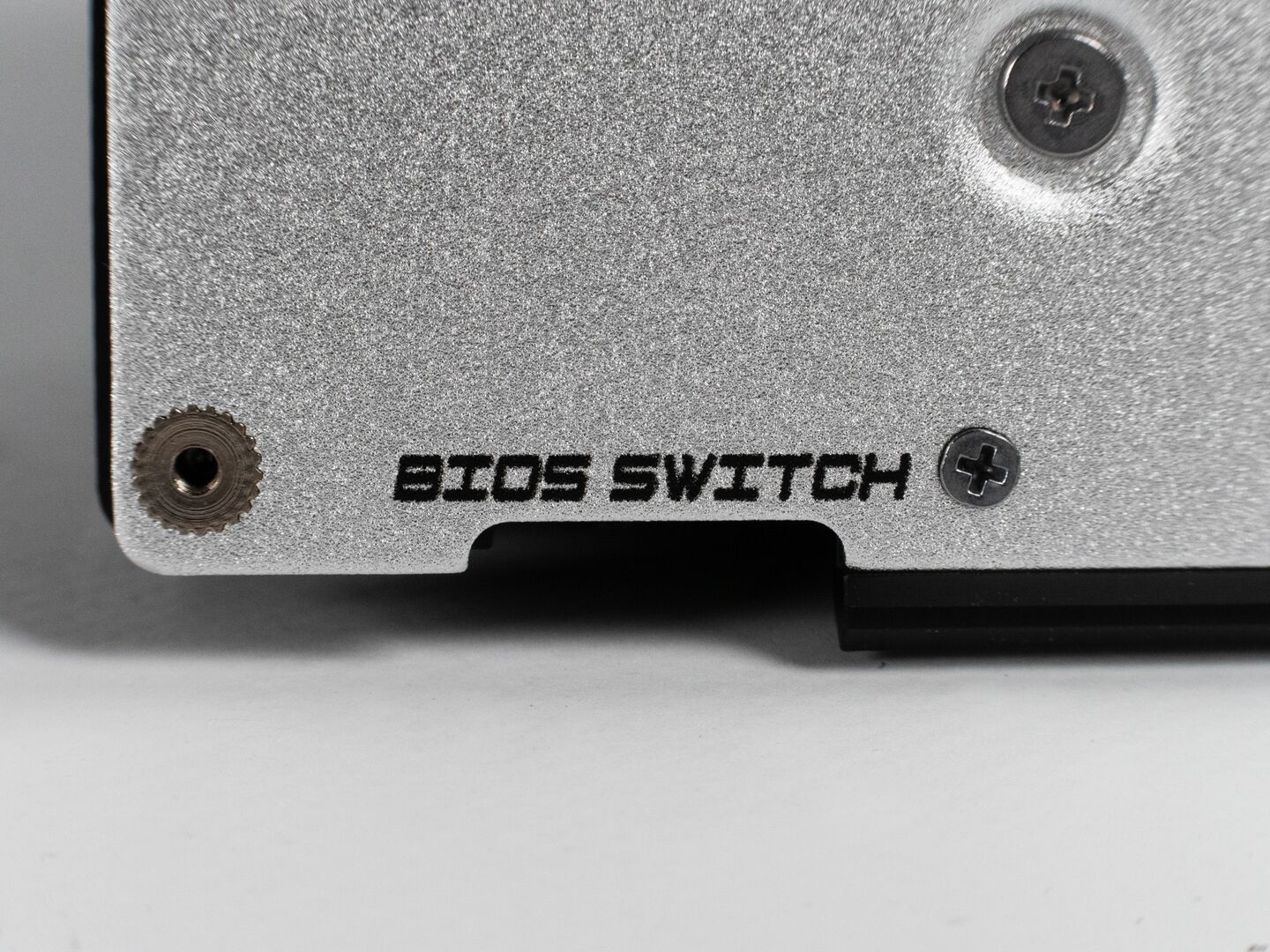 Both cards have a three-position BIOS switch that alternates between Performance and Silent modes. The third position is clever insofar as it allows the user to change the profile within software.

By default, the XT operates at a maximum 2,360MHz Boost Clock – 110MHz higher than reference – while the non-XT chimes along at 2,190MHz, or 85MHz faster than default.

Around the rear, display outputs are kept to the familiar quartet of HDMI 2.1 and three DisplayPort 1.4.

Built like the proverbial tanks, let’s now see how they perform.