by TechFed
in Review, Wildermyth
0

Wildermyth is essentially an epic series of fantasy novels that you write as you play. Blending an astonishingly flexible interactive narrative with rich turn-based battles, Wildermyth sees you take a party of youngblood adventurers fighting with pitchforks and pickaxes, then slowly transform them into grizzled heroes and even epoch-spanning legends. It’s fantasy X-Com, Crusader Kings but for questing. However you want to compare it, it’s probably my favourite game of the year. 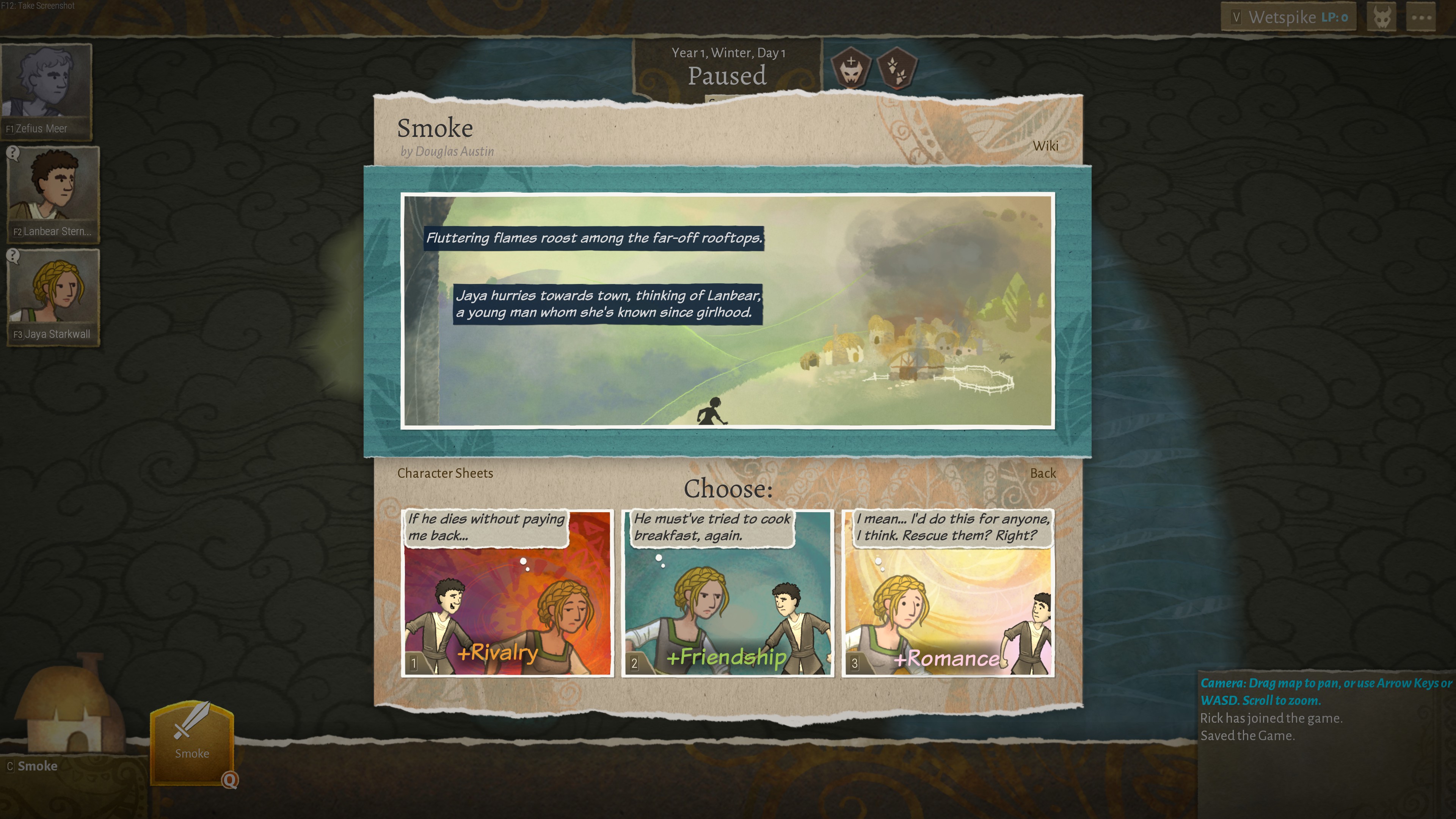 A Wildermyth campaign starts in classic fantasy fashion, with a ragtag group young men and women getting their feet wet in the art of heroism by defending their home from attack by monsters. Initially your characters are fairly faceless, almost literally so, as a consequence of the game’s simple, childlike art-style.

Yet even at this stage, you’ll make choices that begin to shape these lumps of heroic clay, such as what kind of weapon they like to fight with, whether a pair of characters are friends, lovers or rivals. These little decisions and the stories that surround them are communicated through evocative comic book-style panels that zip into place with each click of the mouse.

By the introduction’s end, you’ll have a basic grasp of each character’s personality. At this point Wildermyth zooms out, and the village that was once your party’s whole world expands into an entire fantasy realm ripe with mystery and opportunity. You’ll be given a goal to achieve, which varies depending on whether you’re playing a purely procedural campaign, or one of the five bespoke adventures created by Worldwalker games (each of which lasts between five and 15 hours). Between you and that goal are vast regions of mountains, swamps and grassy plains that must be explored and cleared of monsters. 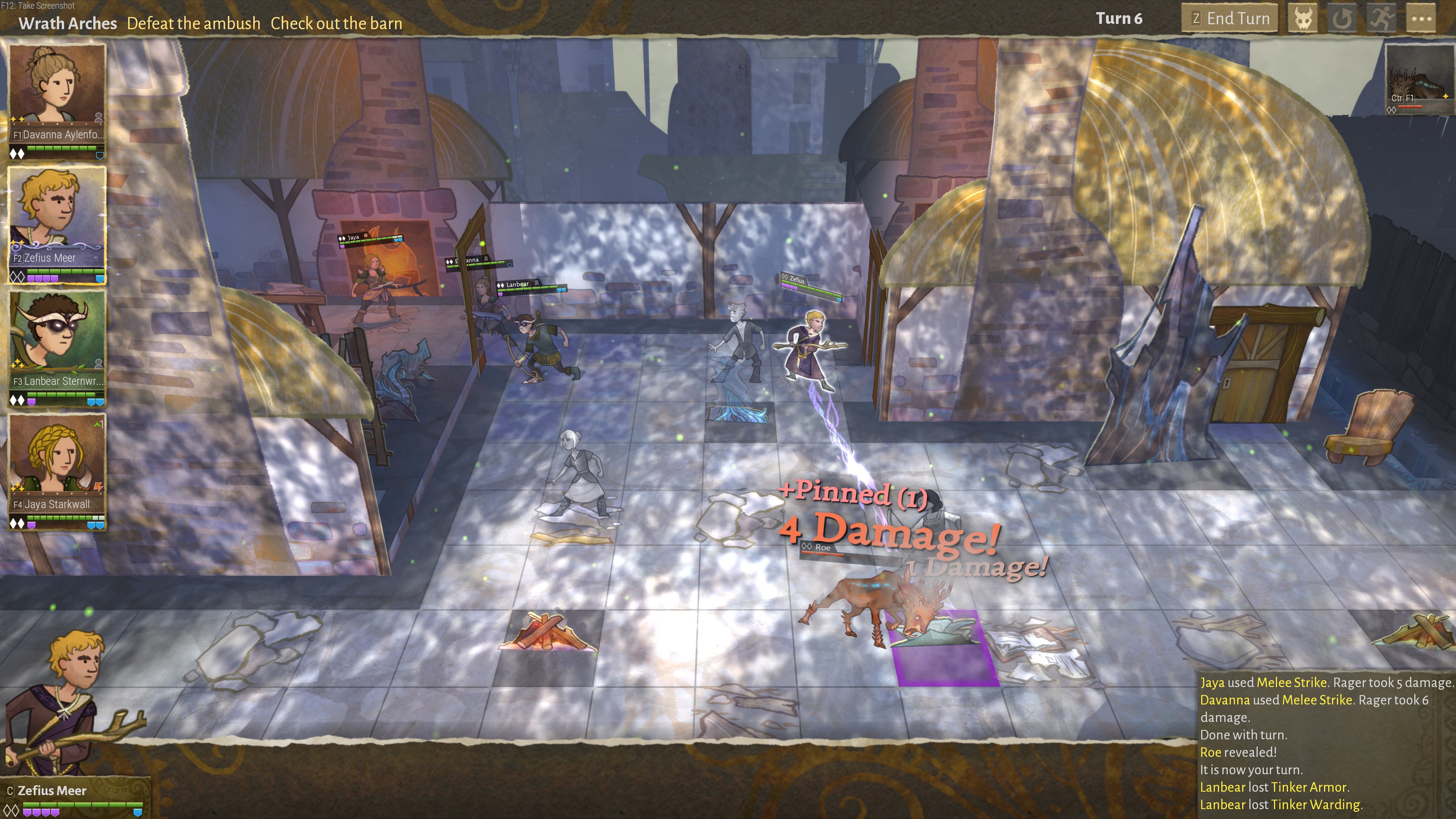 Venturing into a new area always triggers a story event, each designed to flesh out your characters and shape them in new ways. To give an example, I’ll tell you the story of Lanbear, my starting hunter. I originally envisioned Lanbear as becoming an Aragorn-type, a master ranger and woodsman. But this wasn’t what Wildermyth had in store for him. Early on in my campaign, Lanbear began suffer from convulsions, and it soon turned out that his body was inhabited by a demon. The demon gave Lanbear a choice, let it take control of a small part of him, or risk losing his soul.

I chose the former, and Lanbear started to change, growing horns on his head, his feet turning into hooves. By the story’s second chapter, the former archer could only wield a one-handed crossbow. By the third chapter, his sole weapon was his claws. The demon would have consumed Lanbear entirely, were it not for another of my heroes, Jaya, luring him back to the place where the demon entered him, then stabbing him with a weapon known as the Ghostblade, purging the creature from his body. 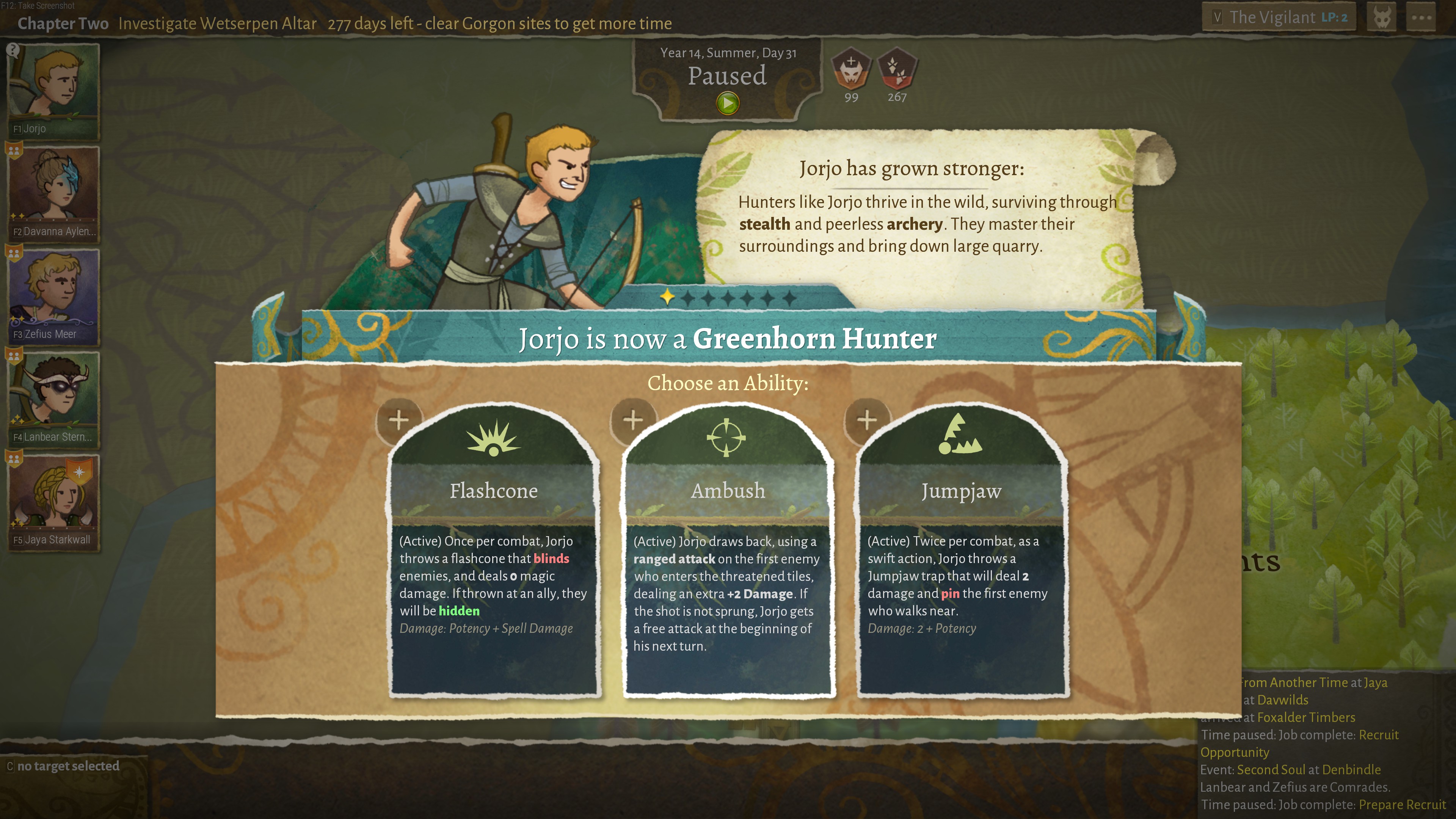 This is one, small example of how Wildermyth’s heroes grow and change. Combat has its own influences. Wildermyth’s battles are classic X-COM-style affairs, sprinkled with a couple of more original mechanics, such as heroes standing adjacent to one another gaining a block bonus. Combat doesn’t appear that special at first, but its impressive depth gradually unveils itself over the course of a campaign. The game’s magic system, for example, is known as “Interfusion”, and sees your Mystic characters form a bond with objects in the game world. These can then be used for special attacks, such as tearing a flying discus of stone out of a boulder, or exploding a wardrobe into a cloud of piercing splinters.

Victory in combat earns your characters experience, which unlocks new abilities. But your enemies also grow in strength over time, gaining longer health bars, sharper claws, and new abilities that’ll cause you all manner of tactical headaches. If one of your character’s health bars reaches zero, then they die. Unless, that is, you choose to save them, at the cost of a wound or other ailment that may afflict them for the remainder of their lives. 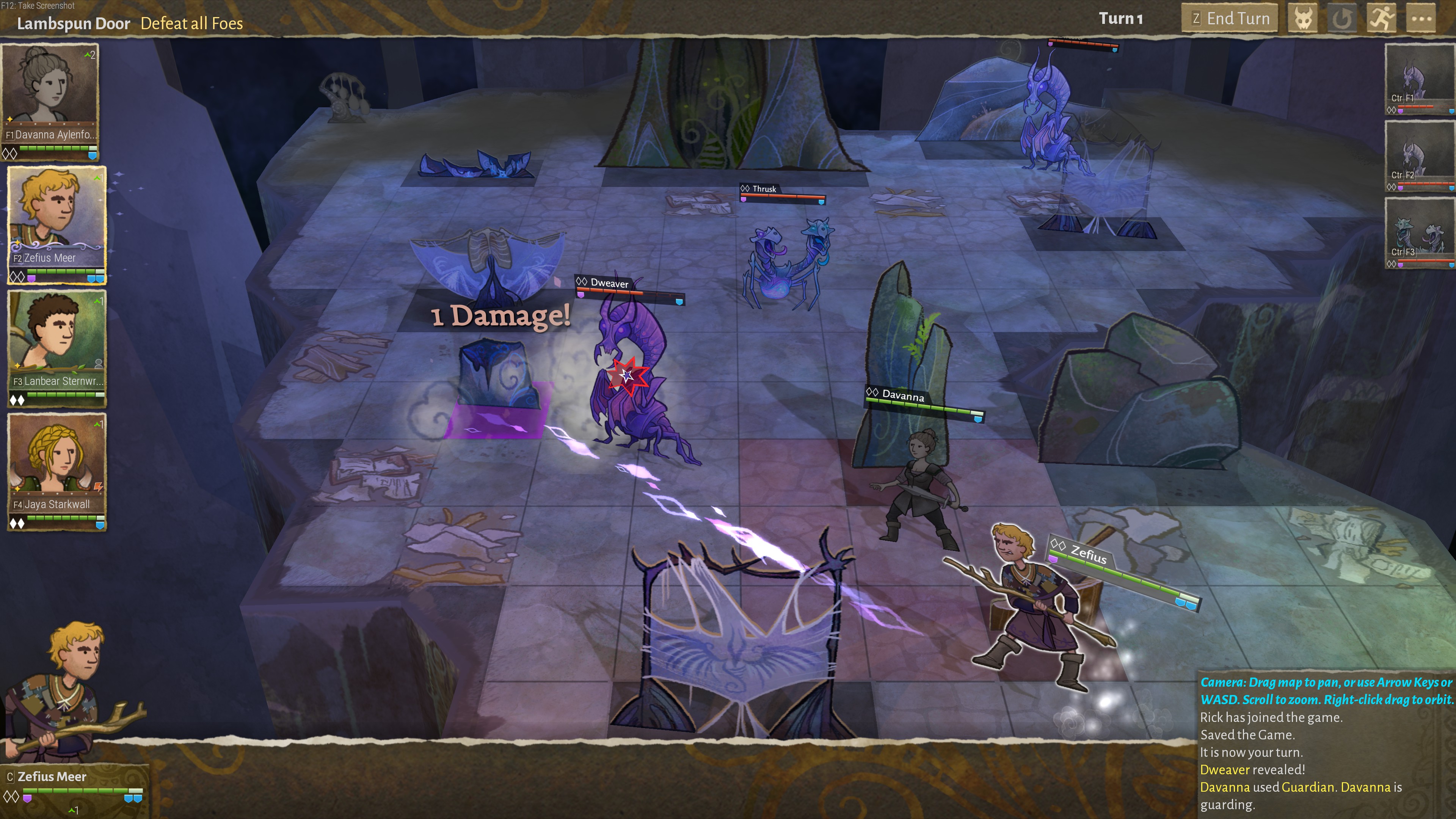 The only constant in Wildermyth is that things change. On and on the story rolls, the months and years passing as you explore the wilds, build bridges and settlements, and fight. Even at the end of the chapter, which always earns your party a few years of peace, your characters’ lives carry on during that time. They embark upon adventures of their own, find love and new purposes. They may even have children, and when they grow up, those children may join your party as heroes too. Even at the end of the campaign, your heroes’ stories aren’t necessarily over. Your favourite heroes can be added to a roster of legends, who can be called upon to join new adventures.

It’s a truly remarkable character development system, genuinely rivalling that of Paradox’s Crusader Kings series. But it’s important to stress that Wildermyth is a genuinely well-made game elsewhere too. The writing is (mostly) fantastic, with elegant descriptions of places and creatures conveying the folk strangeness of Wildermyth’s fantasy. Dialogue is sharp, laced with gentle wit, and impressively consistent between individual personalities. One of my favourite little stories involved my Mystic, Zefius, searching for an ancient altar to summon a demon. He succeeded, but the demon was so pathetically tiny that Zefius ditched the whole idea and walked off. 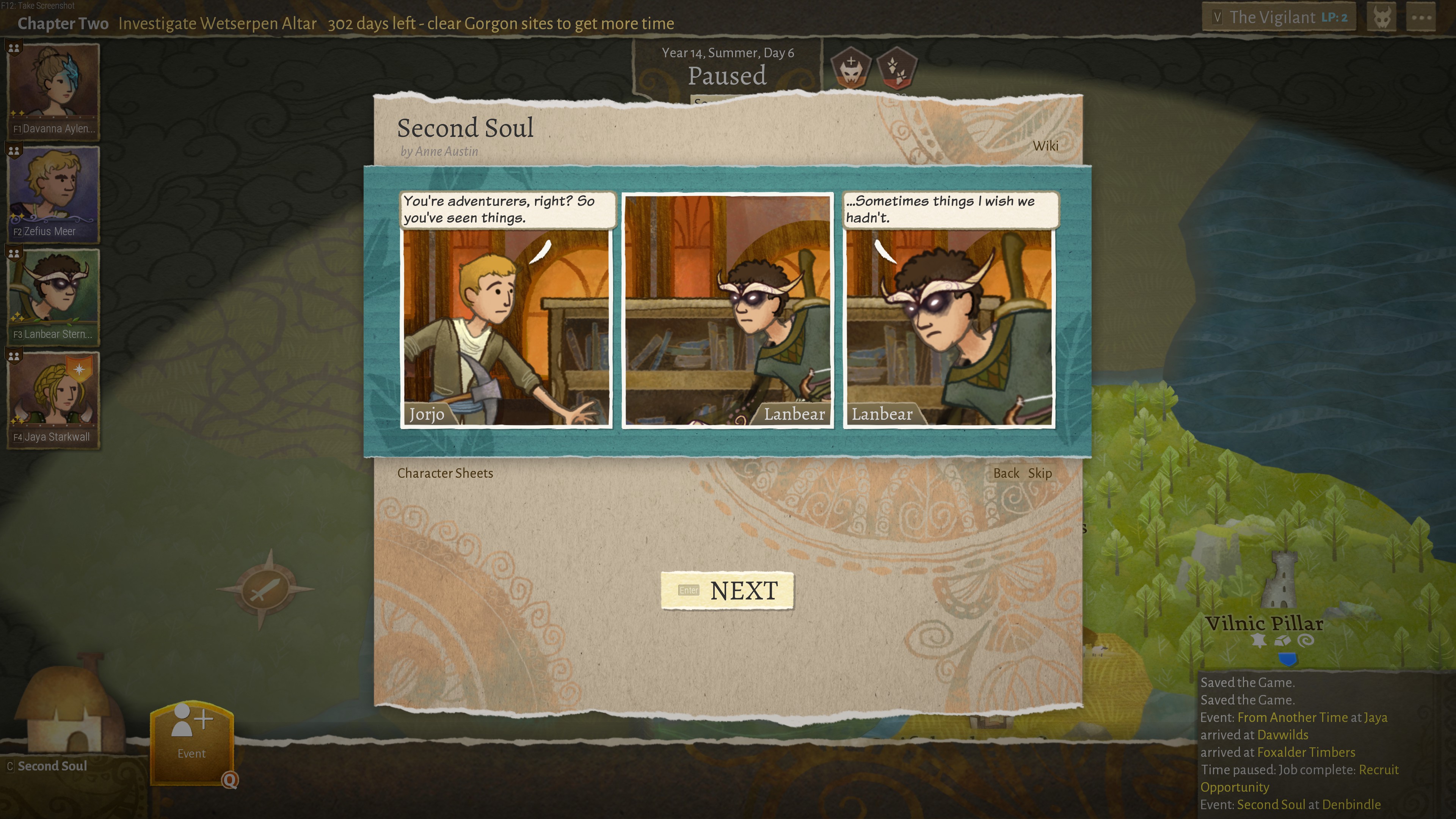 Wildermyth also works as a strategy game at both the micro and macro levels. I already discussed the tactical combat, but the overworld has its own challenges too. While you quest, you’ll also need to deal with enemy incursions that threaten what peace and prosperity you’ve already established, and also find time for more personal missions of individual party members. You can split up your party to help tackle multiple problems at once, but doing so risks stumbling into a fight that you simply can’t win.

As for what’s wrong with Wildermyth, the short answer is “very little”. I can point to a couple of minor gripes. Ordering your party about on the world map can be a little opaque, especially if you split the group up into multiple parties. Meanwhile, I’m not wholly sold on the representation of heroes and monsters as paper dolls in combat. It certainly fits with the game’s storybook theme, but it also makes combat encounter feel a little silly. I think the lack of animation is the key issue. The way characters hop and wobble around the board makes is somewhat farcical given the context. 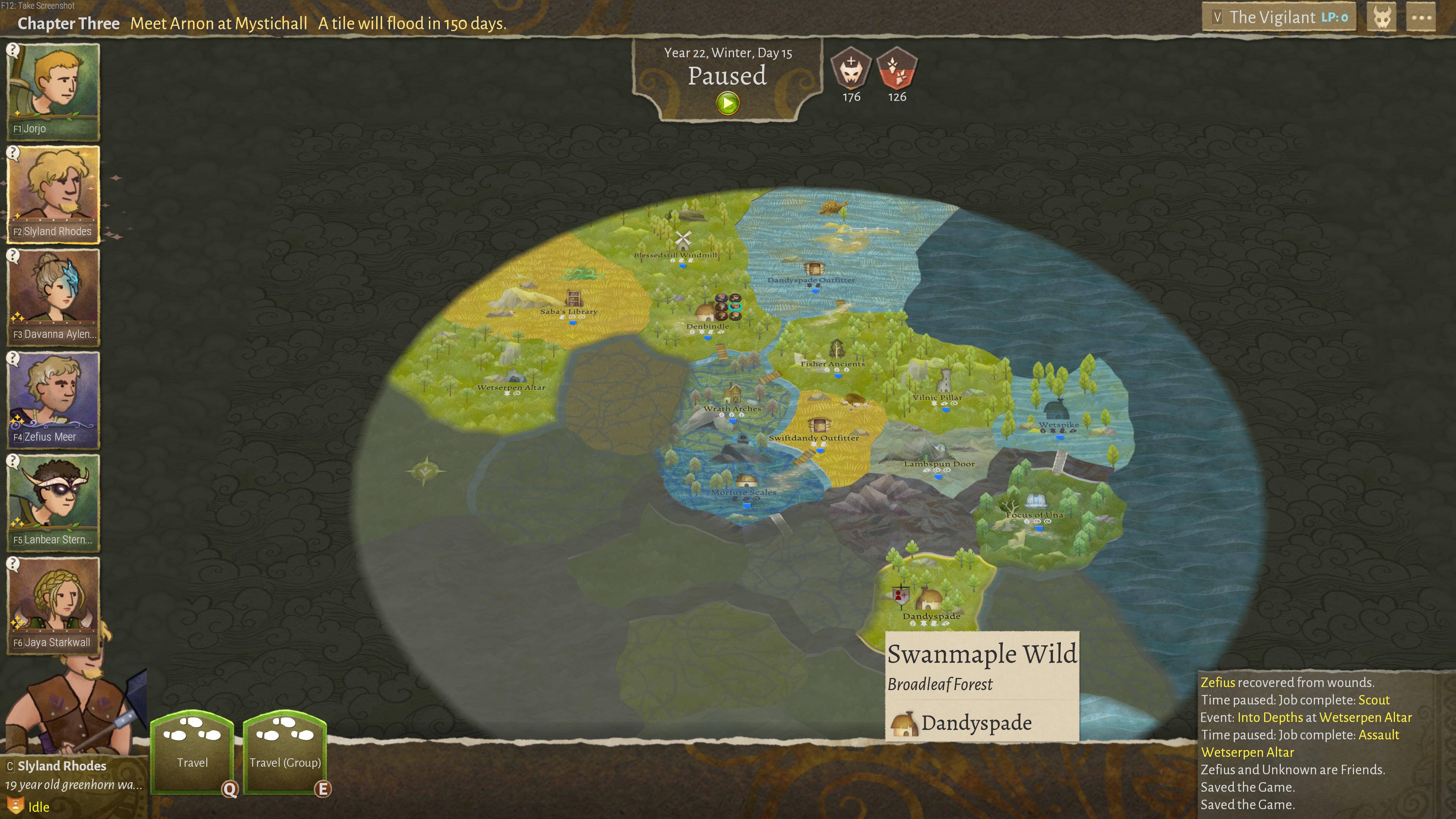 That’s pretty much it for complaints. Wildermyth is a masterpiece of interactive storytelling, a nigh-perfect balance of procedural systems and handcrafted narrative. It’s an endless generator of ripping yarns, a game that everybody should be looking to as a demonstration of how to do dynamic character development.